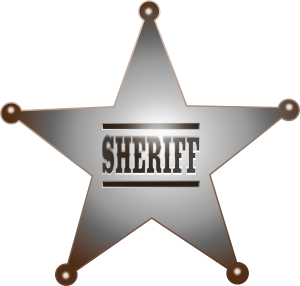 Mrs. Crawford’s heels clattered against the wooden sidewalk like the hooves of a billy goat scrambling over a shed roof.

The town busy body rattled to a stop in front of the Sheriff’s rocking chair.

He lifted the brim of his hat so they could see each other’s eyes.

“There’s a fight in front of the depot!” she screeched.

“I gathered that from all the boys yelling ‘Fight! Fight!’ and running in that direction.” Horace said.

“Are you just going to sit there?”

“That was my intention,” he said.

“Why don’t you do your job instead?”

“Edith,” he said, “it’s not my job to pick a beau for Sara Willodson. She has two lunkhead chasing after her, neither of which she is interested in. Letting them fight it out, halves her problem. Smart girl.”

“But they’re fighting in front of the depot.”

“She’s got a point,” the man on the chair next to Horace said.

Horace turned to his old partner. “You think we should intervene?”

“Nope,” Tom said, “I don’t think ‘we’ should but I am saying you ought to get your ass down there.”

Horace scowled. He lowered the brim of his hat and tilted his chair further back.

Edith had stepped out into the sun to stare down the street. The men ignored her.

“Maybe,” said Tom, “but you made your reputation by keeping the rowdies out of here and you can’t afford to let people believe you’ve gone soft.”

Horace thought on it for a while. After a moment of internal debate, he sighed and reached for his short barreled shotgun then he tilted forward, stepped out into the sun and walked away from Tom and Edith Crawford.

The crowd had formed a doughnut around the fighters and each time one of the boys landed a blow, a cheer went up. From the end of the block, it sounded like the exhale of a weary beast..

Horace mulled over how to handle the matter as he closed the distance. He didn’t give a damn about the boys. Their fight was a long time coming. He just wished they would settle it out on the prairie. What bothered him most was the men by the depot who had egged them into it. Stopping the fight wasn’t important, making a point with the town was…

A few paces from the edge of the crowd, Horace gripped his shotgun in both hands to hold it horizontally. Wading into the crowd, he felled the first man with the butt and sent a second sprawling by jamming the barrels into his liver. In this manner, he paddled his way through the crowd until the throng realized there was a second nexus of excitement.

They quickly split the doughnut into a horseshoe.

The fighters paid him no mind. They were big, square-headed, slab-muscled boys focused on the frenzy of combat and Horace had no intention of getting pulled into a three-way with them.

He watched for an opportunity to sap one of them but before he could move – the mob split again. Something was burrowing through the crowd like a mole pushing though turf. An instant later, a black-clad, hatched face old woman grabbed both boys by the ears and banged their heads together. She shook them with such ferocity that the crowd scattered for cover.

Horace lowered his shotgun and walked back to the office. A few minutes later, he slumped into his chair.

“Tom,” he said, “you reckon it’s too late in the season to head for Montana?”

“Nope,” Tom said, “I’d say when the schoolmarm does your job better than you, anytime is a good time to head for Montana.”