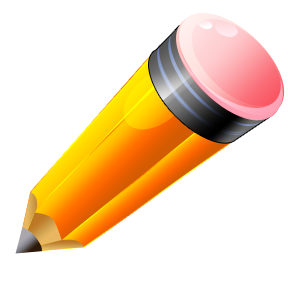 When we were kids, my brother and I turned our attic into an art studio and covered the walls with sketches.

He put his drawings up on one side, and I put mine on the other. This made it painfully clear whose work was better.

By a long shot.

It is just the way it was. He was better at everything. He still is. He is one of those rare and gifted people who are good at whatever they do, which for me was and still is a hard shadow to walk in.

One day while we were working, he said, “I know your problem.”

“You use the wrong end of the pencil.”

He was right. I would rub the erasers off an entire pack of pencils before I dulled my first point. Sometimes, I was so overwhelmed by the urge to revise that I applied the eraser to a blank page.

“Maybe you should start with carbon paper,” he joked, “and work back from there.”

Being desperate, I tried it.. No luck. I still wore away just as many erasers rubbing holes in the carbon paper.

These days he is an artist and I write but little has changed. He still works with clean, effortless lines while I chase my muse through tangled thickets of prose.

What has changed is that I don’t worry about it any more. He has his style; I have mine and I am no longer intimidated by the grace that allows him to get by with less effort.

Back in the attic, I flipped the pencil over once I realized that the line it formed did not match the line in my imagination. Now when the same thing happens with my writing, I don’t let it stop me.

This happens to a lot of developing writers. They start to write, stop, reread what they wrote and get hung up because the words do not measure up to what is in their mind.

Sometimes they even believe the myth that great writing flows effortlessly from the fingers of great writers. The truth is, very few writers work like that.

I will never work as painlessly as my brother but I find the more I write, the more my writing mirrors what’s in my imagination.

It is all about moving forward and using the backspace or delete key, moves the writing backward. So when I compose my first drafts, or just write for practice, I use the keys that put words on the screen and avoid those that take them off.

60 thoughts on “The Wrong End of the Pencil”