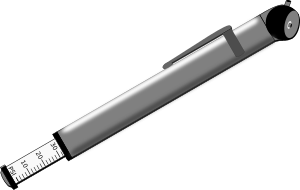 I knew what she was going to say before she said it.

She was wearing her don’t freak out expression.

“Do you really promise or are you just saying that?”

I placed my hand over my heart. “I promise I will not freak out.”

“Because you often do….”

“I promise, now what do you want to tell me?”

“A light on my dashboard says a tire is low on pressure.”

“Why would you make a big deal out of that?”

“Okay then, how low is the pressure?”

It should read 30 lbs, but seriously, this was no big deal. Fortunately, we were filling her car with gas when she noticed, and the Quickie-Mart is one of the last remaining places on earth to provide a working air pump.

All we had to do was add four lbs of pressure.

We pulled around to the side of the building where a long red hose lay coiled on the pavement. At the end of the hose, a brass nozzle hissed softly in the snow.

“Where is your tire pressure gauge?” I asked.

Her expression replied, “I don’t know.”

But the glove compartment seemed a logical place to start searching, so I opened the door.

Good Grief! I wanted to say (but wisely did not). How could she jam so much trash into such a small space without using an industrial compactor?

(I wisely did not say that either.)

On top rested a layer of Kleenex, not pristine unused Kleenex, mind you.

Beneath the Kleenex, I found a wad of insurance cards.

This was not a bad thing. A proof of insurance card is necessary in the event of an accident or a traffic stop. Except none of the cards were current – or even for her current vehicle.

Next came the manuals.

One was the big hard cover manual that tells you everything but what you need to know. The other was the thin flier written by the Customer Experience Team that explains how to do everything but change the time on the dash clock – which you have to do twice a year: spring and fall.

Beneath the manuals were more pencils than common sense would dictate.

And receipts, some dating back years before the car’s date of manufacture.

And discount cards for businesses that no longer existed.

And among all of these things were scattered a wild assortment of hard candy and breath mints.

But not a single tire pressure gauge.

“Before you freak out,” she said, “check the center console.”

I did and it was worse than the glove compartment – but still no tire pressure gauge.

So we winged it. I gave the tire a long shot of air.

“Now what does the display say the pressure is?” I asked.

“No change,” she replied.

“Don’t worry,” I told her. “it takes a couple of miles for your dash indicator to report the true pressure of your tires.”

“You are wearing that look you get when you are lying to me.”

“You will just have to trust me,” I told her as we drove toward home.

A few miles later, just as I predicted, the pressure indicator updated itself. It now read 24 lbs, for a loss of two pounds.

“You promised you wouldn’t freak out.”

“I can’t help it,” I told her, “first I can’t find the freak’n tire gauge and then the pump doesn’t work. Have you any idea where your stupid gauge might be?”

She didn’t say another word. Not one until we got home.

“Follow me,” she said after she shut the engine off.

I trailed her through the kitchen, down the hall and into the bedroom, where she pointed to my bedside table.

And sure enough, there it was.

“It is where you always leave things.”

So humbled yet again, I checked the pressure in each of her tires and filled the ones that were low. After that I serviced my truck and having a compressor and gauge handy, I inflated the tires on everything that rested on wheels: the riding lawn mower, the wheel barrow, the two-wheeled cart and the rotor-tiller.

That night when emptying my pockets to get ready for bed, I discovered the tire gauge still clipped to the breast pocket of my shirt.

I set it gently on the nightstand, and making sure it remained in clear view, I resolved to put it back where it belonged in the morning.

I mean, resolving to do something is just as good as doing it.  Right?

46 thoughts on “My Tire Gauge”