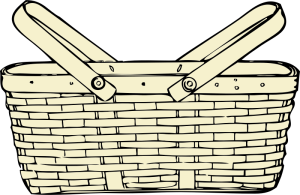 My mother spent the entire week stoking the flames of our expectations.

She reminded us over and over that on Sunday afternoon all of our aunts, uncles and cousins were getting together for a family picnic at Silver Lake Park.

So what did she say the minute we got home from church?

“Who wants to help me peel potatoes?”

Outside the kitchen window, a flotilla of clouds sailed majestically across the sky and somewhere under those clouds, our cousins were leaping out of station wagons and bounding like antelope toward the ball fields and tilt-o-whirls of Silver Lake Park…

AND OUR MOTHER WAS BOILING POTATOES!!

“What would a picnic be without potato salad?” she asked.

“Why didn’t we make it last night?” we cried.

The question shocked her and it took her a moment to shake off the confusion.

“Then it wouldn’t be FRESH,” she said.

For my mother, the word FRESH possessed magical powers. She was among the last of the traditional mothers of the post-war era, and while all of her sisters and lady friends had found employment outside the home, my mother clung to her own apron strings.

FRESH was the talisman she used to protect herself against the larger homes, the newer cars and the more stylish clothes her peers possessed. They may have these things – but they did not have FRESH.

“Check to see if the bread dough has risen,” she commanded one of the girls.

A sister confirmed that it had and we held our collective breath while mother verified this to be true. . Could she really make us wait for dough to rise?

We all knew the answer to that.

As the bread baked, we sliced potatoes, diced onions and shredded carrots. When all that was done, we mixed it all into her big special potato salad bowl and sealed it with sheets of aluminum foil.

“After we bake the pies,” she said.

Out came the lard, out came the flour, out came the sifter along with the big bread board and the rolling pin. We all knew how to make pies and flew through the task: flattening the crust dough, flopping it into the pans, halving the FRESH strawberries and cutting the FRESH rhubarb and slicing the remainder of the dough into strips that we used thatch the pies.

“When the pies are done, can we PLEASE GO?” we pleaded.

“Not until the sandwiches are made and the pickles wrapped in waxed paper,” she said.

And finally, FINALLY… after the last pie, the last thermos, the last crock of baked beans and the last of the potato salad had crested the rim of my mother’s big wicker picnic basket – did she gaze up at the clock.

“Oh dear, we better get going,” she exclaimed.

We all tumbled into our station wagon and dieseled down the street. Twenty minutes later, as we puttered through an expanding suburb, my mother turned to my father and said in almost a whisper, “Jack?”

Dad knew what this was about.

“We are not moving to the suburbs,” he said with absolute finality, “We can’t afford it.”

“But there is no harm in looking…” she said.

We all groaned. “Can’t we just GO TO THE PICNIC?” we cried.

And that was that.

The truth is, she had two models to look at but we only had time to look at the first. So my mother made my father promise to swing by the second on our way home.

An hour later, we pulled into Silver Lake Park just as everyone was sitting down to eat.

My mother pulled out her big wicker basket and spread her red checkered tablecloth out on the picnic table. She arranged the potato salad, the baked beans, the pies and the sandwiches in a long line and invited everyone, family and friends, to help themselves.

While the aunts and uncles complemented her on her cooking, we grabbed what we could and bolted off to play, ignoring the stern warnings to “let your food digest.”

All too soon the summer sun turned deep yellow and sank in the western sky. Our cousins said their good-byes and piled back into their station wagons then vanished into a thin haze of exhaust.

We were the last to leave.

“I guess we better get going if we are going to have time to look at the model,” my dad said.

At first my mother didn’t say a word. She scrapped the plates into the trash and rinsed out the cups at the water pump. She folded her tablecloth and placed it at the bottom of the basket. On top of that, she piled the plates and pie tins – then she closed her picnic basket and sat down on a bench..

As she gazed at her children bounding across the ball fields and spinning madly on the tilt-a-whirls, she pulled the basket onto her lap and rested her hands on the lid.

45 thoughts on “My Mother’s Picnic Basket”