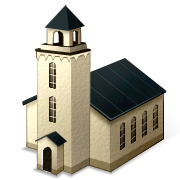 Our church closed last summer, though it was no surprise. We knew it was coming because there just wasn’t enough of us.

We could hear that in every hymn we sang on Sunday.

Scattered sparsely among the pews, our voices mumbled into song as softly as possible and stumbled through the verses until we reached a collective sigh of relief at the end.

Our singing may have been well received in heaven but here on earth, it only reminded us that we lacked the critical mass for song.

So now Saint Mary’s rests in quiet retirement among a grove of sheltering pines that protect her from the prairie winds of Southern Minnesota.

It is a story I am all too familiar with – because years ago, I worked at the headquarters of the American Lutheran Church (ALC), a union of fading Midwestern congregations that itself vanished into The Evangelical Lutheran Church of America (ELCA).

My boss there, was a one of a kind character. A man who functioned as a sort of ecclesiastic fixer. He was the guy they called upon when congregations forgot they were Christian.

One of his favorite stories involved a church on the wind swept plains of eastern Montana.

In those days, the big divide was not race, nor religion – but ethnic conflicts between people who looked exactly the same and believed the exact same things.

In this case, it was the children of Norwegian and German immigrants who were divided by their common religion.

The Germans liked to drink beer and argue. The Norwegians neither drank beer, nor argued, instead their favorite pastime was seething in aggressive silence at their foolish German brethren.

All would have been well had not the boisterous Germans with their foolish ideas, convinced the congregation to build a Lutheran school and floated bonds to pay for it.

The school was built too big, too fancy and too far away from town to attract paying students. Over the course of a few years, it limped painfully into bankruptcy and everyone who supported the school by purchasing bonds, lost their money.

In the ensuing recriminations, knuckles were broke, heads were busted and shots were fired. After their pastor fled to the safety of North Dakota, the church in Minneapolis dispatched my boss.

The first thing he did was sit down with each member of the congregation and listen to what they had to day.

MY BOSS: So what’s wrong with them?

OLD NORWEGIAN: [aghast that a clergyman would ask] They drink beer!

MY BOSS: True – but a lot of Norwegians drink beer too.

When he talked to the Germans, the conversation went like this:

OLD GERMAN: Have you ever tasted what they pass for coffee?

MY BOSS: [a bit confused as to why this was brought up] No.

OLD GERMAN: Have you ever talked to them?

MY BOSS: Aren’t you going to say anything?

OLD GERMAN: See how hard it is to talk to them?

After days of weak coffee and strong beer, my boss managed to soothe enough egos to unite the congregation for a shared Sunday service.

In his sermon, he spoke of forgiveness and reconciliation.

He reminded them they were all children of God and thus brothers and sisters in Christ and that their family must find a way heal.

As he spoke, he kept a sharp eye on the congregation. On the north side of the sanctuary, the Norwegians seethed silently as their German brethren glared back at them from the south.

After the sermon, as the collection plates floated among the pews, everything changed. The contributions flowed. In fact, the envelops piled up so fast that the ushers had to make several trips to empty the plates.

After the service, as my boss removed his robes and made plans to return to the Twin Cities, the ushers shuffled in to talk to him.

“There was lots of envelops,” the lead usher said, “but all they contained was the worthless school bonds. I guess that is all we are going to get until they are gone.”

Little remains of that church today and nothing remains of the school to interrupt the winds of Eastern Montana but if you visit the region, you can still find a few old Norwegians seething in silence and a few old Germans arguing about days gone by…. and while the old Germans and old Norwegians never reconciled, their grandchildren did… and isn’t that the way it always goes?