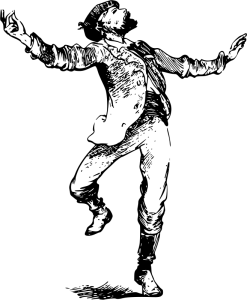 It always goes like this.  We will be out driving somewhere when a song I like comes on the radio.

“What are you doing?” my wife will ask.

I’ll tell her I am dancing.

“You’re bouncing about and jerking your arms.”

“When you dance,” she’ll explain, “there is this thing called the beat.”

I’ve heard that before.

You see, I never learned to dance. It is something many in my age group never learned to do – at least properly. Our teens years landed in that awkward gap between the dance crazes of the early 60’s and travesty known as disco. You didn’t so much dance back then as you stood at arms length from your partner and gyrated. If you were off-beat no one noticed and if you were out of step – well, there really wasn’t any step to be out of.

It was half of what killed dancing. The other half was the bands.

For this I blame television and most notably Dick Clark. Before American Bandstand, people showed up to hear the music, after Bandstand they came to watch the music.  It shifted the focus of the music and it is hard to watch a band perform when you have a person in your way – that is why we let go of each other.

By the mid-70’s, dance music for adults had all but faded away. The big bands dissolved and the ballrooms closed. In Minnesota, fire took the Terp Ballroom and the Lakeside. They tore down The Prom in Saint Paul and shuttered The Marigold in Minneapolis.

Now for anyone over thirty, the only place to dance is at weddings.

Most wedding halls have a dance floor and after the meal has been served and the last toast muttered into a microphone, a DJ will fire up the tunes.  It is always too loud and the acoustics are always terrible.  You have to shout to be heard by the person across the table.

When the music begins, only the children enjoy it. They hop and squeal around the dance floor, bouncing about and jerking their arms just like I do when I do my happy dance.

But after a few tunes, the music will slow down and an old couple will glide out onto the  floor. He will lead her and she will keep him on the beat until a few more couples step out to join them.

The DJ will then shuffle through the well worn litany of wedding dance numbers: Proud Mary is obligatory, as is The Beer Barrel Polka and of course, The Chicken Dance – and inevitably, the music will settle into something soft and sentimental, like The Tennessee Waltz.

It is the only dance I can do convincingly, and as more and more couples thread their way between the tables and out onto the floor, I will turn to my wife and say, “Do you want to dance?”

She will cast an eye on the gently flowing vortex of couples and say, “I thought you would never ask.”

54 thoughts on “My Happy Dance”