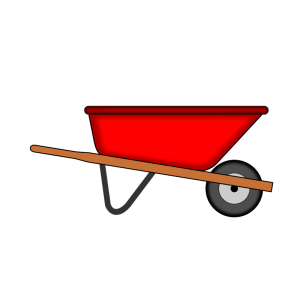 A big green dump truck rumbled down our road. After rattling past our house, it squeaked to a stop and backed up into our driveway.

But before I could do anything about it, a massive load of dirt slid onto the asphalt.

“I needed black dirt for the gardens around the house,” she explained, “so I called Bob’s Black Dirt.”

I couldn’t believe she called Bob. “We have ten acres of dirt,” I told her.

“But not around the house,” she said.

Our house rests on a pad of sand and gravel that keeps it high and dry. The rest of our property is black peat ground, some of the richest soil in the world.

“So you bought dirt and had it put on the driveway,” I asked, even though it was more than obvious what she did.

“It will only be in the driveway as long as it takes for you to move it.”

I did this because I loved her and it made her happy.

But then we moved. Moving was not my idea but it also made her happy.

At that house, she did not ask for heaven to be moved.  It was okay where it was. But I moved a whole lot of earth.  I did this more out of a sense of duty than to make her happy – but still I took satisfaction in doing my duty.

At the house after that, a bit of heaven needed to be moved but not as much earth as the last two places – and I did this just to keep the peace.

Now I am still willing to move heaven and earth for her but I reserve the right to do so grudgingly.

“Instead of buying dirt,” I told her, “I could have dug it out of the pasture and dumped it around the house.”

“Sure,” she said, “and you would have taken forever to do it.  This way, you won’t be able to put your truck in the garage until you are done.”

She had me there.

Out of exasperation, I raise my gaze toward heavens and asked the sky why, oh why?

The sky gazed back from behind a veil of gathering storm clouds.

Having no desire to shovel mud, I sped into town to buy a really big tarp and who did I run into at the Big Box Store?

Why Bob, of course.

He wanted to know whether I would be willing to sell the rich black peat dirt that rests beneath a pasture we never use.

On the drive home, I shared the irony with the sky and she thought it so hilarious that she laughed until she cried…

43 thoughts on “My Wheelbarrow”