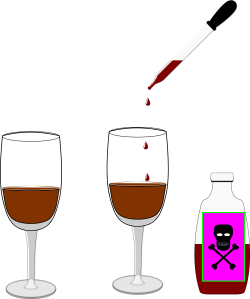 In the entryway, an arm swished into a nylon jacket.

Rose called from the living room,  “Where are you going?”

“Ice-fishing,” Jerry barked back. The clunk of a plastic bucket confirmed what he said.

He mumbled something she couldn’t hear.

He peeled off the thin jacket then struggled into a heavier fabric.

“Don’t forget your cap,” she said.

“Where did’ya put the damn thing?”

“It is where you left it last.”

Silence followed the bang of the door. Those were the first words the house had heard in days. Rose tried to remember the last time she felt affection for the man but that only reminded her of how long it had been.

Mostly, these days, all she felt for him was irritation.

He retired years too early. Now they lived separate lives in a very small place. They seldom got out and when they did, they did so without each other. She shopped the malls. He fished alone.

They would have been a typical couple enduring a low-spot in their relationship had he not gotten so unbearable. He was not abusive nor mean. Far from it.

What he was — was there. All the time there, annoyingly there and she wanted him gone.

She considered divorcing him but thought better of it because their resources were too meager to split. What she wanted was him gone permanently. As in dead.

At least then she would have a full pension and insurance money. But she didn’t know how go about it.

After years of watching Murder, She Wrote and CSI, Rose knew you didn’t just bump someone off. There was always the lingering trace: a thread, a fingerprint, a molecule of DNA. The police eventually figured out who did what and how – and the spouse was always the prime suspect.

She couldn’t imagine keeping her composure under interrogation. The cops were like bloodhounds, they could smell culpability, so if she was going to murder Jerry, she would have to do it without the tell-tale trace of guilt.

She tried to think of ways of accomplishing that but her mind refused to move in that direction.

This was hard for Rose because murder was not something good people did; and she was good people. To kill Jerry would require that she be angry enough to be not good and for her that was impossible.

She spent the morning in the living room, determined to rid herself of Jerry. Not only did she not know how to go about it but she did not know how to even begin thinking about it.

As she thought about how to begin – a key scratched at the side door, followed by the faint tick of turning tumblers and a bolt gliding almost soundlessly open.

She startled. Was that Jerry? It was far too early for him to be returning.

What if he was thinking the same thing as she?

She might be afraid to do something like that – but not him. Even if he couldn’t do it himself, the kind of people he hung out with could.

Had he hired a killer?

The door hissed across the carpet as it swung slowly open. Footsteps. The creak of weight shifting across the sub floor. A muttered obscenity; it was Jerry.

Why was he sneaking around?

He headed into his room, taking pains not to make a sound. The door clunked closed, and moments later his television murmured to life.

What was he up to?

Rose waited a few minutes before making her way back to his room. She stood in the hall by the door.

“I thought you went ice-fishing.”

“You forgot your cap, didn’t you?”

She let herself in.

He sat tilted back in his leather recliner looking only at the television, a tattered and stained checkered blanket covering his legs, a beer and a sandwich on the nightstand.

“Did you come in here to nag me?” he accused.

She started to speak but held her tongue.

His crassness appalled her.

He was picking at the remains of a tuna salad sandwich she had prepared for herself the evening before. It had been on his nightstand uncovered, unrefrigerated for far too long. She doubted even the cat would risk eating it.

That is when a wave of inner-peace washed over her.

Even a few hours ago, she might have scolded him. Told him that tuna and mayonnaise could be lethal if left out overnight – but after all her fretting about a way to guiltlessly rid herself of a husband, the solution had presented itself as something so simple.

“You know what?” she finally said.

“I’ve nagged you for the last time.”

31 thoughts on “How to Murder Your Spouse: A Short Story”