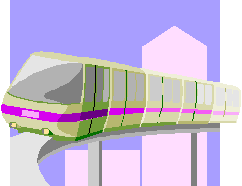 Remember how amazing the future used to be?

If you don’t, you are probably too young.  In that case, pick up a copy of Popular Science Magazine, circa 1956 and see what it used to be like.

Believe me, back then the future was a whole lot better.

In that future, atomic powered monorails zipped between mile-high skyscrapers and cars got 5 million miles per gallon (of plutonium).

But coolest of all, everything had tail fins, even the architecture.

In the 1956 future, no one went unemployed, overtime started at two hours per week and cat litter boxes were cleaned by the mere push of a button.

Well, not really. The future had its dark-side too. Mostly because of evil robots.

According to Analog Magazine, which my friends and I read voraciously, robots stalked the future’s nights, usually intent upon something nefarious, such as kidnapping damsels.

We never learned what maniacal plans were in store for these beauties, but one thing we knew for certain, they were always rescued in the nick of time by chivalrous preteen boys (much like ourselves) and the damsels were always grateful (which we found oddly troubling).

So if this is what the future used to be, what happened?

Where is my atomic powered monorail and why am I stuck in this dystopia scooping cat turds out of a litter box, instead of zipping through a cantilevered megalopolis in a car that gets 5 million miles a gallon?

I blame it all on Leon Hartman.

You see… Leon was the only teen to actually rescue a damsel from a robot.

Her name was Estelle.

Well… it wasn’t exactly a robot.  Rather it was a tabulating machine in the basement of the Fidelity Insurance Company in Buffalo, New York – but he did save her.

The machine, a notoriously diabolical IBM 407, tricked the inexperienced Estelle into leaning too close. It snatched one of her curls into its gears and slowly, maniacally, drew the frantic Estelle into its mechanical maw.

Leon pulled the plug in the nick of time, and Estelle was grateful (which troubled Leon but not so badly that he failed to ask her out).

They fell in love, got married and purchased a new two bedroom rambler in a suburb located midway between Love Canal and Three Mile Island.

Their home was a marvel of modern chemistry.

The exterior boasted shingles made from Amazing Asbestos: a miracle material that actually gets stronger with age and the interior was colored shockingly bright by the answer to the old alchemist’s dream – white-lead paint.

But Leon and Estelle were blithely unaware of the ticking toxicity of their life, rather the only flaw in their otherwise ideal existence came to Estelle’s attention one morning after they moved in.

“Do you hear that?” she asked.

“You are talking in riddles,” Leon said.

“The reason you cannot hear anything,” Estelle said, “is there is nothing to hear. Our new development has no birds. Not a one.”

“You are losing me.”

It seemed a reasonable request, so Leon planted a beautiful silver maple sapling in the front yard, but no sooner had he dragged the hose out to water it then an angry delegation of neighbors surrounded him.

The chairman of the housing association shook a dog-eared copy of the development’s by-laws in his face.  “You can’t plant a maple on Elm Street,” he thundered.

“Because you moron, it’s Elm Street.”

It would be nice to say, then it hit him but it didn’t. It hit Estelle first.

A week later while driving in bumper to bumper traffic just outside of New York City, she turned to Leon.

“What are we doing?” she asked.

“No, we are not,” Estelle told him. “We are sitting in an automobile that looks like a rocket, going nowhere.”

“It’s a metaphor,” Estelle said, “tail fins in a traffic jam is our future…”

That is when it hit him.

“Let’s chuck all this and move to the sticks,” he said.

“Yeah, we’ll get a place where the cat can bury his turds outside, so I don’t have to clean the litter box. I hate that.”

Estelle didn’t say a word, but she smiled inwardly. She didn’t want to tarnish Leon’s dream. The best dreams, she though to herself, are the ones left unfulfilled.

43 thoughts on “Where is my Atomic Powered Monorail?”