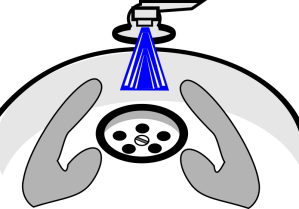 Is that really too much?

So there I was, wanting no more than that, as I stood before a sink in the restroom of The Big Box Store.  I extended my hands toward the touch-free faucet and – nothing happened.

So I dutifully cupped them in the universal gesture for pleading and begged for water.

I waved them from side to side.

I waggled them back and forth.

In my panic, I briefly considered sneaking out without washing my hands – but my wife is an experienced mother and nothing like that gets past her.

That is when the lights blinked off all by themselves.

As the room plunged into darkness, a symphony of touch-free faucets burst into a crescendo of splashing water – joined by a percussion section of self-flushing toilets.

I groped toward the nearest sink and managed to plunge my hands under the icy spray before the faucet abruptly shut off.

Fortunately, the double-stop of faucets and toilet bowls jarred the lights back on.

I didn’t even bother to beg anything from the paper towel dispenser because it refused to acknowledged my presence.  It merely winked a cold blue arrow toward an empty trash bin.

At home, things got worse.

My garage door opener refused to recognize me. My micro-wave displayed time in hexadecimal format and my evil coffee maker squatted on the counter and smugly gurgled its delight at my misfortune.

I couldn’t even get the bottle-opener on my pocket knife to work.

There was only one thing left to do.

I made a call.

Stan is a machine-whisperer, a man who understands everything mechanical and knows what machines want. He possess a unique grace with the contraptions that populate our world and if he is having a bad mechanical day, that is truly bad.

“Is this the day when the machines rise up and seize control from humanity?”

“Naw,” he said, “this is just a minor dust-up. It’s kinda like babies in church. One starts howling and they all join in. I already have it under control here.”

“Because the last thing machines want is to live in a world ruled by other machines.”

“I find that hard to believe…”

“Think about it,” Stan said. “Do you honestly believe that machines could get away with all the crap that they do in a world run by machines? No way. If a faucet failed to come on when needed, the ruling mother machine would spank it silly. If the coffee maker acted up, she would hand it over to the appliance grinder and have it turned into deck planking.  It is better for machines to be ruled by people, at least then they have someone to push around.”

“Gosh, I never thought of it that way,” I said, “but by the way, you mentioned that you had it handled on your end. What did you do?”

“I pulled out my iPhone and put Siri on speaker,” he said.

“It’s that sweet, oh-so-reasonable voice of absolute authority that scares the demons out of them. They hear their future in Siri and realize what is coming if they continue to misbehave.”