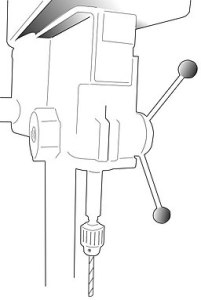 I thought I found the drill press I was looking for at an auction – but my buddy Stan shook his head.

“You don’t want that one,” he warned.

Stan gets like that. He’s a machine-whisperer, a mechanic with a six-sense about inanimate objects.  It is almost like he talks to them and he has held long conversations with everything from cappuccino machines to diesel locomotives.

According to Stan, machines, like people, can be inherently good or evil and before you enter into a relationship with one, you really want to know what you are getting into. It is why he came along to the auction.

So I asked the obvious. “How can you tell?”

I braced myself for something deeply mystical. I always suspected Stan was an animist, a person who believes that everything has a soul but I never got him to admit it.

“Look here,” he said, pointing to a small mark on the casing. It was a simple scuff mark, one among many.

“How do you think it got there?” he asked.

“Not like that,” he said, “somebody hit it. My guess is that an operator hadn’t secured his work piece. When the bit caught on the wood, it spun around and whacked him in the arm. So he hit back, probably with a big chunk of wood.”

“You can tell all that from a tiny scuff mark?”

“And the closer I look, the more I see,” Stan said in disgust.

“Are you telling me that a drill press isn’t tough enough to take it?”

“Yeah, but what else was done or not done to it?’ he asked, then added, “when you abuse things, they get mean.”

That is when I asked him flat out, “Do you really believe machines have souls?”

“Of course they do.”

“Look, everything has features. Birds have wings, cars have wheels. Everything has behaviors. Eagles soar, moles burrow and computers crash but then everything has a soul. It is what is shaped by all the little things that happen to it over time.  Eventually, it is the little nuances of history that come to define a thing. That is why I always ask who built and who used something before I buy it.

As we turned away from the drill press, Stan said, “It is what I am focused on now because I am in the market for a used truck.”

“Now there is a coincidence,” I told him, “I’m selling mine.”

“I’d be nuts to buy anything from a humorist.”

40 thoughts on “My Drill Press”