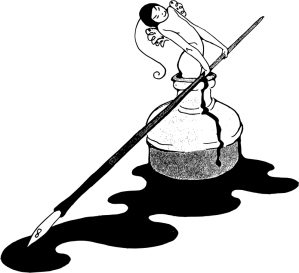 It was 6:00 am and the sun was fast asleep somewhere far to the east. This was my writing time, but I was not alone.

In the past, my muse would have been there lounging on my couch, weaving words, spinning fables and giggling at every clever twist of a phrase, but that was months ago.

She was never satisfied with our work and sadly felt that what she needed was to find a muse herself, so off she ran in search of one.

First, she suffered through an abusive relationship with a muse named discipline, followed by a tumultuous affair with inspiration, only to rebound to discipline.

And after each heartbreak, she retreated to my couch to console herself with the bucket of chocolate chip ice cream that I keep hidden in the garage freezer.

This time it was not her on my couch. In fact, whoever it was, did not appear to be a muse at all, more like a librarian – at the Pentagon.

“You asked who I am, and I am telling you.  Muse Management to be precise.”

“Never heard of such a thing.”

“Most writers have not. They are too busy writing – but then there is you.”

“My boy, you definitely need a muse and as luck would have it, I have a few available, each with an unique style. I will send them by and we will see who works for you.”

The dude wore sandals, a tattered bathrobe and random bits of his last meal scattered throughout his beard.

All I could think of to say was,“Huh?”

He dug through the cushions until he found it, wedged under the bag of Doritos I lost last winter.

“Your new muse. You got any pretzels?”

“Aren’t you supposed to be helping me write?”

“Relax. I’ll come up with something sooner or later. Meanwhile, the TV don’t watch itself.”

“For the third time, who are you?”

“Yeah, sometimes writers get us confused.”

“I love what you have done there.”

“Precisely, so full of hope and promise. You could put anything there.”

WHO ARE YOU? I typed.

“Such a wonderful beginning to the piece, it puts the reader on the edge of their seat.”

I typed the second line. I ASKED, WHO IN THE BLAZES ARE YOU?

“Now, that’s how to amp up the suspense!”

I AM WAITING FOR AN ANSWER.

WHERE WERE YOU THIRTY YEARS AGO?

DayGlo colors swirled about the room and intergalactic spies galloped about on bucking unicorns. For a moment, I thought I was experiencing a psychedelic flash-back from my hippie days.

“Inspiration, is that you?”

“Just give me one good one.”

“Why not a million?”

The next muse came straight out of Conan, the Barbarian. It was the mercenary muse who has plagued Diana, over at Myths in the Mirror.

Discipline and I have never gotten along.

My muse manager was back and her scowl did not bode well for my writing career.

“I am almost out of options,” she confessed.

“Do you still have that bucket of chocolate chip ice cream hidden in the garage freezer?”

“Welcome back. Help yourself.”

“Hold on, just one question.”

“In all the years we worked together, I never got your name.”

“Glad to know. Are you back to stay?”

She said nothing – but as she shuffled off toward the freezer in the garage, she seemed to focus on something far, far away.

One can find the full story of My Muse and I here:
My Muse

Breaking Up is Hard to Do, Especially With a Muse.