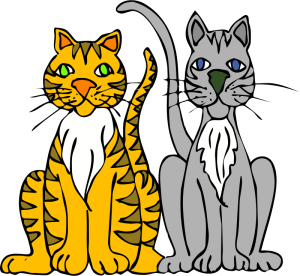 Every night while it is still very dark, I get up and stumble toward the bathroom.

So I stumble in the dark.

Even half asleep, I remember to swing wide around the cedar chest that waits in ambush at foot of the bed. Once clear of the chest, I veer left to avoid the dresser whose sharp edges hover at hip level.

If the hallway is bright with moonlight, I am home free but if it is dark, I trip over cats.

It is always the same. I trip over them because they refuse to sleep anywhere else and there is no way to avoid them.  If I stay to the right, they sprawl to the right.  If I feel my way along the left side of the hall, they have that covered too. If I take a middle tack, I nail both of them.

Either way, they yowl and I cuss.

It is not like they don’t see me coming. They do. They track my progress as I grope toward them in the dark. They know that I don’t see them, yet they lay there like landmines. They follow my every footfall until I step on them.

Then they savor their indignation.

For a cat, there is nothing more satisfying than being on the right side of a moral equation and having suffered for it. It is better than catnip.

So why do they do that?

If I had an elephant for a pet, I surely wouldn’t lay in its path in the dark.  But at least for my cats, being tread upon provides just the right amount of leverage for household politics.

In the morning while I make breakfast, they pad into the kitchen and one after the other,  sit on their haunches to confront me. They know that I know what I did to them in the dark and they figure it ought to be worth something.

So I toss them a few scraps of bacon.

It is not enough.

I try to sooth their indignation by scratching between their ears then I check their food dish and their water and their litter-box and I keep doing little things for them – until I stop and ask myself why am I doing these things? Why am I allowing myself to be guilted by two cats who, night after night, deliberately sleep in the hall knowing that I will stumble over them?

The ranks of the aggrieved are always bursting with volunteers – at least in our house.  For every time a cat is trod upon – privilege follows.

But then they do as they always do – they take it too far.

While I am frying bacon in the pan, first one then the other will leap up onto the counter and gently tip-toe, taking one tentative step at a time toward my plate of bacon.

That is when I stomp my feet hard enough to rattle the cupboards  – and they scatter, perhaps pondering, if only for a instant, what those feet are capable of.