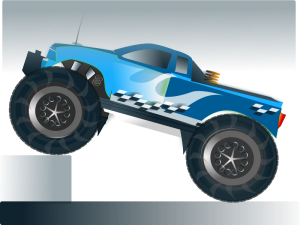 My stepdaughter called to ask if I would stop by the Civic Center to pick up tickets for Saturday’s event – Monster Jam.

It was close by, so I told her it wouldn’t be a problem.

Then things got awkward.

Though nothing was said about me going too, I suspected she didn’t want me along. Perhaps she feared I would disturb the tranquility of the event with my boisterous behavior.

She hemmed and hawed before delivering her pitch, “I was hoping you could watch Maddie.”

Ah, that was it, grandpa was to be babysitter.

On Saturday their mini-van arrived and the kids rushed to the door.  They frantically rang the bell as they swirled on my stoop, bouncing from one foot to the other. As I opened the door, they burst through the entryway discarding boots and coats in a mad flight toward the bathrooms.

My stepdaughter handed over Maddie’s bag and inquired about her mother visiting in Arizona– then exclaimed in a tone usually reserved for a full diaper, “Ewww – Opera!”.

To her all classical music is “opera” but today she was right, I was doing what I have done for more than fifty years, listening to the Saturday afternoon broadcast of The Metropolitan Opera.

This week it was Leos Janácek’s Jenufa, a story of a pregnant unmarried girl’s conflict with her mother who had became the moral wag of the village after the death of her abusive alcoholic husband.

As much as this story could come straight out of small town Minnesota, my enjoyment of classical music and “opera” has always been a fountain of mirth for my rural in-laws. It is something I must compensate for by demonstrating an affinity for NASCAR, tractor pulls and Monster Truck expositions.

For them “opera” is a tool people use to demonstrate their superiority to others, but it is not just “opera”, it is everything urban they reject.

Conversely my urban friends consider spending an afternoon at Monster Jam as a personality flaw.  Something that one does not reveal in polite conversation.

For them diversity is people who look different but think the same.

Sadly, these two groups have something in common that comes straight out of Candide; they isolate themselves in the best of all possible worlds.

It is not so much they enjoy different things – rather they all too often define themselves by what alienates them from others.

I find all of this rather odd because I came by the habit of listening to opera in a decidedly downscale manner. I grew up in a large family in a blue-collar neighborhood and on Saturday afternoons everyone in the family was assigned a cleaning chore, mine was to scrub our immense kitchen floor with a bucket and a sponge. As I meditated upon row after row of linoleum tiles, I listened to the Metropolitan Opera on WCCO.

My father, a plumber, loved the broadcast and found no incongruity between opera and low rent because his German parents and their neighbors understood and enjoyed the over-blown theatrics of opera.

Despite all of these contrasting cultures, my fate on this Saturday was to spend much of the evening immersed in the culture of a two year old.

She grasped her cloth book and shook it in my face.  “Read, read,” she insisted and sometime during the fiftieth reading of Each Peach, Pear, Plume she nodded off then woke and nodded off again.

I hummed a lullaby that I used with my children to coax her into soft slumber.

She lay against my chest, clutching my sweater and lulled by the resonance of my voice, finally, finally,  drifted off to sleep.

The next thing I knew, the door clicked gently open and her mother tip-toed in.

“Awww grandpa,” she whispered, “You… singing a lullaby?”

As we gently transfer her sleeping child, I whispered back.  “She likes it. It is from an opera, Mozart’s ‘The Magic Flute’”