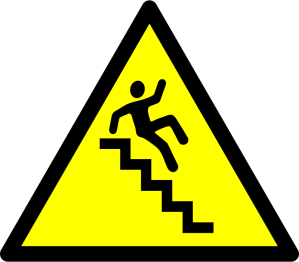 This is because we inhabit a netherworld between chaos and confusion, a place where we must follow irrational protocols to get anything done.

For instance, every night I use the same method for locking up. I always begin with the entryway door. If I were to deviate from this order, even in the slightest, I would wake up to find the patio door open all night. I don’t know why this is but I know enough not to question it.

In short, you don’t tempt fate.

The same protocols must be observed for locating things – and there is no better example than in the writing of this essay.

Yesterday when I sat down at my iPad to write, nothing happened. The Bluetooth keyboard I use was dead. Sure enough, both of its AA batteries were depleted.  (Probably because I left it on all night after tossing a novel on top of it)

The protocol for finding anything in our house begins with yelling.

“Hey hon, where are the batteries?”

There is only one way to check a junk drawer. You dump its contents onto the kitchen floor.  Once everything is scattered nicely about, you methodically sift through the mess.  I did this but failed to find a single battery; not a D cell, not an AA, not an AAA. Nothing. This was very odd.

So I scooped everything back into the drawer and returned it to its slot in the cupboard and only then did I advance to the next step: yelling across the house.

“Did you put them someplace else?”

“Check the Stairs That Lead Nowhere.”

The Stairs That Lead Nowhere are a flight of steps hidden behind a door in our hallway that climb straight up into the ceiling. It is as if the house was designed for two stories but the builder got bored after the first.

It is where we toss the things we don’t want to throw out.

When I say “toss” I am not speaking figuratively. We literally toss things up the stairs then quickly slam the door before they tumble back into the hall.

Whenever we open the door, an avalanche of stuff spills out.

So the process for finding something in the Stairs That Lead Nowhere is to stand off to one side and open the door. Once everything tumbles into the hallway, you methodically toss it all back in until you find what you are looking for.

But when I opened the door – nothing came out. Everything in the Stairs That Lead Nowhere was neatly packed into bins and tubs.

This was deeply troubling

“Hey hon, you cleaned the Stairs That Lead Nowhere!” I yelled in a panic.

“I had too,” she called back, “you blogged about it and told everyone in the world what a mess we had – so I cleaned it.”

“Yeah, but where are the batteries?”

“They are there somewhere.”

So I began by searching the bins at the bottom of the stairs. I found the floor wax bin and the window cleaner bin. I located the shoe polish bin and the light bulb bin. I came across the tub for rags and the tub for plastic grocery bags – but I could not find batteries.

“Are you sure they are in here?” I yelled.

So I checked everything within reach and not finding the batteries, I slowly scaled the stairs, carefully gripping the edges of the steps and wedging my feet into the tiny toeholds left between the tubs. I almost made it to the top before I slipped.

The entire edifice that my wife had so carefully built collapsed and I, with everything else, cascaded into the hall.

So I did what protocol demanded I do. I scooped up what was on the floor and chucked it up the stairs – slamming the door before it could all tumble down – and there lying all by itself on the hall floor was a pack of AA batteries.

Like I said, you don’t tempt fate. If there is a way fate wants you to do something — that is the way you do it.

35 thoughts on “The Stairs That Lead Nowhere”