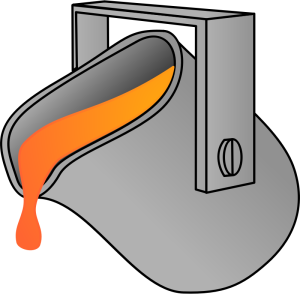 My friend Stan never joined the middle-class because he never came close to having these things.

He never learned how to use a calendar or a watch and as for the second thing, let’s just say he never dated anyone as reliable and stable as himself. So skipping the basic qualification for a middle-class lifestyle, Stan vaulted directly into the upper-class.

Other than having wealthy parents, there is only one thing you need to join the upper-class: a talent so rare that people will pay anything for it.

That’s Stan in a nutshell.

He may be illiterate, unreliable and unstable but Stan has a valuable talent. He knows machines, really big ones, ones larger than your house. You find these beasts in steel mills, mines and chemical plants. They are the heart of the industrial process and when they go down, management gets annoyed.

To give you a taste of what he does, here is a tale he told me about his last job.

He was called to a steel foundry in a bad section of Gary, Indiana. The neighborhood was built as a slum then over the years it deteriorated until even the rats moved out – but the foundry remained, looming over the desolation like a smoldering volcano, spewing blankets of black ash and dust everywhere and rumbling with a rage that rolled over the city for miles.

The problem was a monster of a machine, one designed to devour steel molds then spit parts one way and sand another.

But it never did what it was intended to do.

Instead, it attacked anything that came within reach. It pulled a 35 ton overhead crane off its tracks and once snatched a fork-truck off the charging station. It seriously injured several mechanics and chased the Safety Director across the shop floor. All this would be forgiven if only it did a reliable job – but the monster flat out refused to be responsible, so Stan was called in.

He took one look at the beast – and stepped back.

“Yup, it’s a real son-of-a-bitch,” the plant engineer told him.

“You’re kidding,” the engineer said. “What are you, the machine whisperer?”

No sooner had Stan crawled into the belly of the beast then it went into spasms. It thundered and belched clouds of soot, flailing its rocker-arms and thrashing its chains. It did everything it could to murder him.

The engineer thought he was a goner – but Stan emerged unscathed.

“Well, what does it want?” the engineer asked, somewhat sarcastically.

“It wants to kill,” Stan told him.

Had Stan’s reputation not proceeded him, the engineer would have thrown him off the property.

“I am serious,” Stan said, “that machine has a black heart. All it wants to do is to destroy anything that crosses it’s path.”

“Can I soothe the soul of a killer?”

“Talk to my agent,” Stan told him, “he handles the business end.”

A month later, the foundry scheduled a shut-down. Most of the workers took vacation and only a skeleton crew remained to work under Stan’s direction.

When the foundry started back up you would hardly know it, it purred so softly.

After they wrapped up the paperwork, the plant engineer asked, “I watched you. You didn’t do a damned thing we didn’t do. You replaced a lot of parts, sure, but we did the same. What did you do that we didn’t?”

Stan considered the risk of giving away his trade secrets then said, “It’s pretty simple, I have another project at a major junkyard on the west coast. They were having problems with a car shredder, a big sucker, built to be mean – but the machine couldn’t bring itself to harm a thing.”

“Nope,” Stan said, “I swapped parts. Your killer is now slaughtering cars out in Ontario California, while the heart of their pussy cat is sifting molds and sand on your shop floor.”

10 thoughts on “What Do Machines Want?”