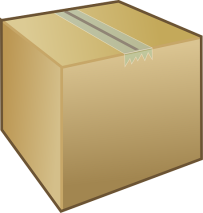 One day many years ago, my mother found a pale green postcard in our mailbox. She glanced at the front, frowned, flipped it over and read the back.  Something about it was not right.

The size was right. The font looked right. The heft of the cardstock felt right. All of these things indicated an official notification from the U.S. Post Office. Everything was right but the addressee. The card was addressed to my brother Jim, who at the time had just turned seven.

The card said a parcel waited for him at the main Post Office in downtown Saint Paul. What it did not say was who sent it or what it was. Those things would remain a mystery until we picked it up.

When my father got home, my mother asked, “What do you think?”

“I dunno,” he replied, taking off his work boots.

“It looks suspicious,” she said, “who would send a parcel to a child?”

My dad finished her sentence. “…and not address it to his parents.”

But Jim wasn’t suspicious at all. He bounced like a puppy. “Let’s go get it!” he cried.

Dad turned his gaze from the postcard to the meatloaf cooling on top of the stove. “The Post Office is closed,” he said, “We will have to wait until Saturday.”

Jim collapsed and flopped like a crappie on the kitchen floor. “WHY!!!!!” he howled.

“Is that meatloaf?” dad asked, ignoring him.

“Is it Monday?” mom asked, knowing full well what day it was.

Jim didn’t like meatloaf. He wailed throughout supper and continued on and off all week. Waiting until Saturday was too much for a child to bear.

When he wasn’t wailing, Jim studied the card. Mother had pinned it to an old cork board in the kitchen and Jim stood eye-level to it on a shaky kitchen chair, hoping that by willpower and concentration, he could uncover a new revelation that his previous hours of scrutiny had been unable to detect.

“Could it be a dog?” he wondered out loud.

“Could they mail a turtle?”

My mother thought about it as she added milk to a cake mix, “Unlikely,” she said, “but possible.”

“Then it could be a turtle?”

She hesitated before moving the mixing bowl to the blender. “Did you tell anybody you wanted a turtle?”

Shouting over the blender, she said, “Grandpa would just bring it over. People mail things from a distance. Who do you know who lives a long way away?”

When dad got home, mom took him aside. “Jim has been telling people he wants a pet. You don’t think some poor animal is suffering at the post office?”

Dad sighed and shook his head. “We will have to wait to find out.”

On Saturday morning, my brother got up and wolfed down a bowl of Cheerios, long before the winter sun squinted over the horizon.  While he was eating, it struck him.

Gazing at the back of the Cheerios box then at the postcard on the bulletin board, he knew instantly what was waiting for him at the post office.

He bounded up the stairs.

“I know what it is!” he announced at the door of my parent’s bedroom.

“Go back to bed,” my father growled.

“That would come in the regular mail,” my mom said, knowing all about promotional trinkets that cereal companies pawned off on kids.

“Nuh-uh,” my brother said, “a rocket-car wouldn’t fit through the mail-slot.”

“The kid has a point,” dad said. “I’ve been wondering about that box too. It’s gotta be big.”

The old man came out of the bedroom and headed for the bathroom,. “Now, he’s got me curious,” he called back over his shoulder.

A moment later, mom plodded out of the bedroom and slipped into the bathroom to talk to dad. My parents always thought they were talking in private but our house was too small for that.

“Jack, don’t open it until you get home,” We heard her whisper.

She then said something about sibling rivalry and they both went quiet for a moment.

An hour later, our battered blue Plymouth returned to the curb and my Dad lugged a huge box through the front door and set it ceremoniously on the dining room table.

As the family gathered around it, my mother announced that before she removed a single layer of packing paper that everyone had to agree that the contents of the box – were going to SHARED!!

Mother held her ground. She knew the mysterious box had given her the leverage to extract at least a reluctant promise to share.

Once the promise was given, my mother snipped the twine and Jim attacked the box. He clawed madly at the packaging, sending shreds of paper whirling into the air and settling like leaves on the dining room floor.

He tried to rip open cardboard lid but it was held by staples. It took Dad a few minutes and trip to the garage for a screwdriver to open it.

As Dad pulled aside the layers of tissue paper, the box revealed…… towels and a note.

The note was from our great aunts in Chippewa Falls Wisconsin, who concluded after their recent visit, that we needed a new set of towels. In light of the fact that my brother had recently celebrated his birthday, they addressed the parcel to him.

The shock! The horror! The agony! My brother’s face melted into a mask of devastating disappointment.

Mom looked a little hurt. “What did they find wrong with the towels we have?” she asked.

“Nothing,” Dad said, “but I doubt we will have a problem sharing.”