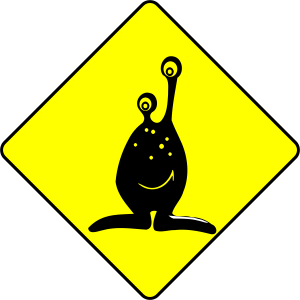 Something out there did not seem right, so I got out of bed to investigate.

The moonlit sky was naked of clouds and toward the casino to the south, the horizon swarmed with unworldly red lights that flickered like fireflies.

I returned to bed and nudged my wife.

“Something is out there” I told her.

She moaned in her sleep.

I nudged her again.

“It has got to be extraterrestrials,” I said, “lots of them.”

She raised her head and blinked out the window. “Windmills,” she declared then dropped back into a gentle sleep.

I trust the old girl. I value her opinion, I really do – but she is too willing to counter the miraculous with the mundane. I’d never seen lights like that before and windmills simply do not drop out of the sky – but extraterrestrials do.

I recalled a lecture on PBS by the astrophysicist Steven Hawking. He said our planet is probably not the only one with an OCCUPIED sign out front and according to him, we do not live in the best of galactic neighborhoods. A close encounter is likely to not end well for us.

If those were extraterrestrials down by the casino, why had they come and what did they want?

In the backyard, a crisp wind bullied the branches around as the moon chased a cluster of stars across the arc of the Milky-Way.

Earth is located in a distant spiral arm of the galaxy; astronomically speaking, we live in the boondocks.

I thought about it some more. Any society with the technology to vacation on distant stars is far more civilized than we are. So why come here?

They are probably so civilized that their children don’t hit, bully, steal or swear. Their teens are probably respectful, cooperative, polite and calm. I will even bet their politicians are clean and their love lives sensible

I am sure every one of them is just as good as their mothers dreamed they would be and their oldest and most cherished institution is most likely The Society for the Prevention of Damned Near Everything.

As I thought about it, an owl hooted and something skittered through a brush pile. It reminded me of how much I love being away from the city.

Maybe, just maybe, extraterrestrials love the boondocks for the same reason country people do. It’s a place to get away from all that civilized crap.

So how did they know about us?

Actually, that is the easy part. We advertise.

Think about it. We have been broadcasting commercials into space for a hundred years.

Without realizing what we were doing, we have lit up the intergalactic freeway with advertisements for Marlboro cigarettes, Michelob-Golden-Light and The Friday Night Smack-Down on FOX.

Imagine this scenario: a hyper-civilized family is out for a three-week tour of the galactic wilderness. Mom has the controls because she didn’t like way Dad cut too close to Sagittarius. The kids are bored out of their minds and do what all kids do on road-trips: they punch radio buttons.

Suddenly… a deep resonate voice echoes through the star-ship, “Just a little pinch between teeth and gums…SKOAL Chewing Tobacco!”

She banks hard toward the center of the Milky-Way and fires off a terse note to “The Society” about unregulated wilderness radio frequencies.

After returning home, she raises a ruckus at the zoning commission about the lack of warming buoys around our solar system.

Later when he gets together with his buddies, he mention the trip. “You know,” he says, tossing a glance to make sure no one is listening, “I know a place…”

Which explains why they landed at the casino.

24 thoughts on “Something Is Out There”