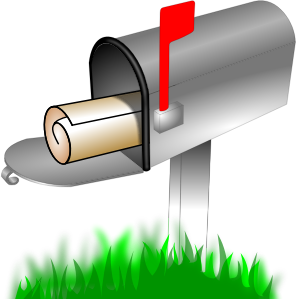 When I went to check the mail – there wasn’t any.

There wasn’t a mailbox either.

I suspect the road-grader clipped it and pushed the debris into the next county. At least that is what happened the last time.

I once complained to the operator about it – but it is impossible to argue with a guy driving a twenty ton machine. You may be able to speak truth to power but not to that kind of power.

To be fair, the road-grader isn’t the only thing that has it in for my mailbox. The garbage truck uses it as a sort of scratching post and the teens who live up the road like to play pin-ball with it.

You would think a sensible person would place his mailbox beyond the reach of destructive forces and sensible people do just that – but we are not blessed with a sensible location.

While most of our neighbors live on straight gravel roads, our road follows the meanderings of Two-Drunk Creek until it dumps into the equally meandering Five-Drunk Creek.

The creeks were to be nothing more than roadside ditches but when the contracts were let out, the young and inexperienced county administrator allowed an older and more experienced contractor to price the work by the linear foot.

The contractor then hired two drunks who had a hard time keeping anything straight to do the digging; hence the meandering.

On the basis of glowing written reports, the young and inexperienced county administrator then extended the contract to hire three more drunks: resulting in Five-Drunk Creek.

Today these creeks are mere dimples on the land, clogged by buckthorn and willows but what was once bad ditch work has become something extraordinary, the perfect habitat for the world’s largest species of snapping turtle.

The first time I spotted one of these creatures I thought an immense boulder had blocked the road. Then it moved. I couldn’t believe anything that huge could maneuver under its own power until it sprinted after a deer.

I asked a neighbor, “What do they eat?”

He answered, “Anything they get a hold of.”

The turtles are the only thing the guy with the road-grader respects.

So what have we here?

We have two meandering creeks clogged by buckthorn and willows where exotic wildlife eats anything that moves.

In other words, what we have is too much of a temptation for the Department of Natural Resources (DNR).  They declared the area a nature preserve – right up to the gravel road – and God help you if you plant anything, much less a mailbox on DNR land.

So while turtles, creeks, buckthorn and willows are protected, my mailbox is not.